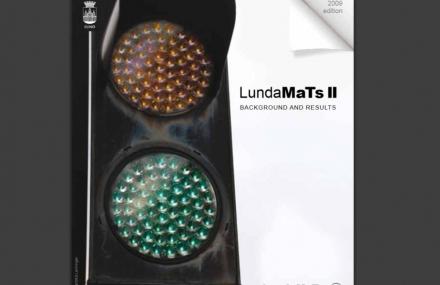 Lund is the twelfth largest municipality in Sweden in terms of population, and the ninth largest based on number of jobs. The City Council of Lund embraced the first traffic strategy LundaMaTs in 1999. In 2006, the strategy was updated and is now called LundaMaTs II. LundaMaTs work is longterm and the goals are set for 2030.

LundaMaTs stands for environmentally adapted transport systems in Lund. Lund believes that it is possible to combine growth with ambitious environmental goals. However, turning a vision into reality requires concrete measures. LundaMaTs has identified six key areas that are significant in achieving the end goals. Each area comprises a number of defined action packages, which enable specific targets to be set. The six reform areas LundaMaTs addresses are: Public Transport, Road Transport, Urban Planning, Commercial Transport, Pedestrian Traffic and Bicycle Traffic. There are currently eighteen goals within LundaMaTs (see the LundaMaTs brochure). One of the overall goals is to reduce motor-vehicle traffic in favour of alternative modes of travel, but this goal is also a means of achieving other goals, such as improving quality of life and health, and creating a city that attracts both people and companies.

Much of the work that takes place within LundaMaTs framework can be defined hard or physical measures. However, Lund has recognised that it's one thing to ensure that the opportunities are there, and another thing entirely to ensure that people are aware of them and willing to try them out. For this reason an additional reform area, Mobility Management, which means behavior modifying measures, has been added to the six existing areas. LundaMaTs involves actors across sectors and departments. This requires a function with organisational responsibility for ensuring that the work takes place across the organisation, while maintaining efficiency and a holistic approach. The management system is the second reform area that has been added to the original six.

The results of the measures and strivings that are outlined in the plan are explained in annual evaluation reports, which are meant for politicians, citizens and other interested. The goals presented in LundaMaTs II have been incorporated in the budget planning process and in the operational plan of technical administration. The ambition has been to integrate LundaMaTs in other plans of the municipality in order to engage sustainability thinking in all actions.

According to local traffic planners, the mobility strategy has had a positive impact on proposing and realizing tougher sustainability measures. In political debate, the LundaMaTs strategy has also worked as a tool when promoting and giving pedestrians, cycling and public transport a higher priority. Furthermore, the plan has  been visible in the overall planning and it has encouraged cooperation between politicians and officers from different departments in the municipality.

As a consequence of measures, such as campaigning, investments in cyclists and pedestrians, clear political goals and evaluation practices, and change in the planning culture, the use of motorized vehicles has declined by four percent in 2012 compared to 2011. At the same time, cycling has increased by seven percent and the use of public transport by four percent. This development will most likely enhance the interest in continuing the development of the LundaMaTs mobility strategy.